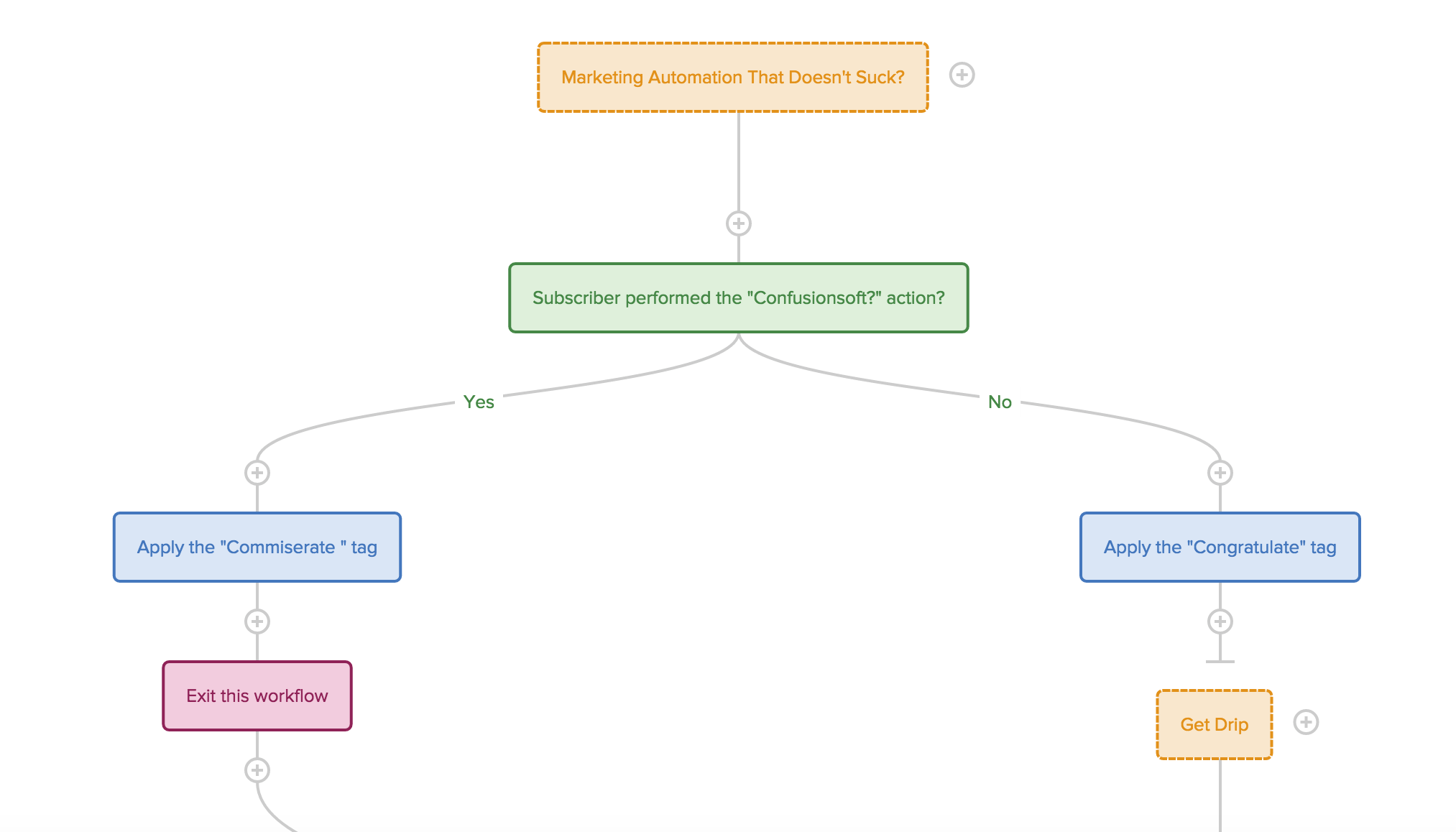 GET A FREE DRIP ACCOUNT
Visualising Email Workflow
As you know we’re big fans of Clickfunnels to build out our own marketing & sales funnels. The full version (or “suite”) of Clickfunnels comes with Actionetics where you can create “Action Funnels” which are sequences of emails that trigger from an event.

Whilst you can create rules so that an email will only go to someone that meets certain criteria such as has not bought product X, you cannot create if/else statements and take people out or stop sequences based on achieving a goal.
And you can’t visualise your rule based sequences and quickly see how many people are at each part of the workflow.
Enter Drip with it’s visual automation workflows to conceptualise your automation rules. We use the Drip popup on our blog to offer an email course on using content marketing to drive leads.
We had early access to play with this new interface. It’s a game changer.
Previously the only email marketing automation platform that had the ability to create a goal and pull someone out of a sequence once achieved was Infusionsoft.
But their visual campaign builder is cumbersome both in terms of being left-to-right so you have to zoom around all the time and also in having to create individual sequences and then double click within to actually add the emails (or even simply add a tag). Likewise in Active Campaign you have to not only build the automation workflow within the visual builder but also the emails too – this gets too crazy way too quick.
In Drip you can see the entire workflow, top to bottom and the interface is clean. Here is one built for Dan Norris, co-founder of WP Curve, for a marketing funnel on his 7 Day Startup site: 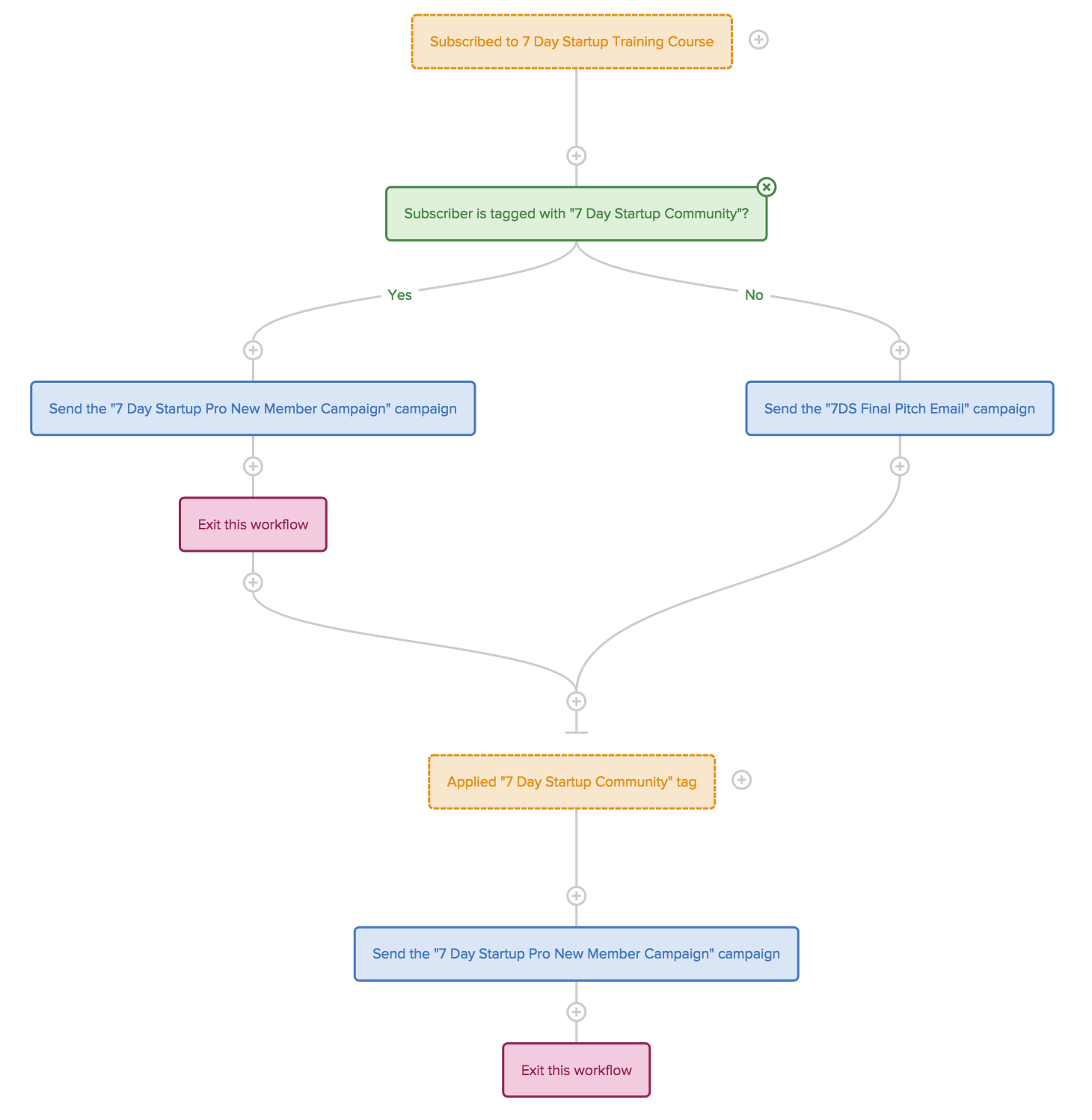 This workflow is triggered when someone signs up to the free 7 Day Startup course on his site (which introduces his paid community) and then branches based on whether someone has already become a paid member using a decision path.
When someone pays on the site they are tagged as “7 Day Startup Community” and Drip will look for this tag on a contact’s profile to either add them to the (prebuilt) “7 Day Startup Pro Member Campaign” if the answer is “Yes”.
If the answer is “No” the workflow adds them into the “7DS Final Pitch Email” campaign and the sequence comes to a stop goal (depicted by the break in the workflow) until the paid tag is applied.
In Infusionsoft, if you wanted to create an if/then branch you need to first drag and drop in a “decision diamond” into the visual builder and then double click on it to set up multiple rules in a table-based interface that isn’t visual!
The above visual workflow has replaced a number of previous basic automation rules such as the one below: 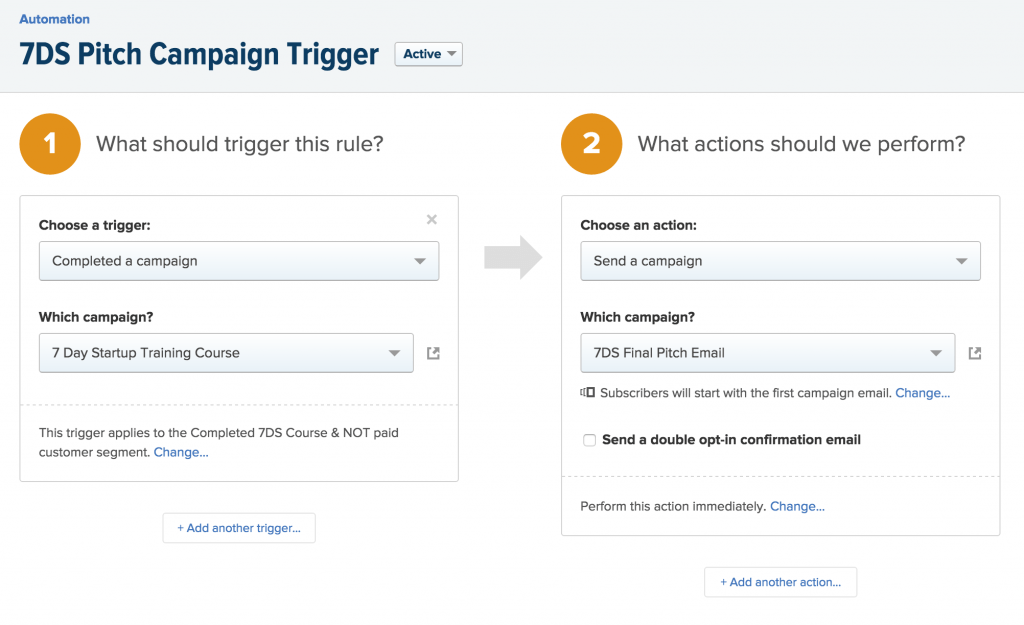 This means that rather than having 10-20 individual rules, a Drip account can in fact have just a handful of automation workflows and using Drip’s new ‘Start a workflow’ action you can visually link between them – this is huge.

GET A FREE DRIP ACCOUNT
Copyright 2018 - Funnel Engine - Building profitable funnels, one at a time...